Home/Magnetospheric Physics
Magnetospheric Physics
Magnetospheric research focuses on the plasma-filled region of space dominated by the Earth’s magnetic field. This region is the host for a wide variety of plasma populations including the cusp, aurora, radiation belts, ring current, and plasmasphere. Magnetospheric dynamical processes such as magnetic reconnection, storms, convection, particle acceleration, and wave-particle interactions control the flow of mass, momentum, and energy throughout the system. Magnetospheric research at SwRI includes: determining the variation of oxygen in the plasmasphere and outer magnetosphere, understanding magnetic reconnection with direct observations of ions at reconnection sites, investigating the coupling between electric fields and currents in the magnetosphere during geomagnetic storms, and analyzing plasma precipitation into Earth’s atmosphere. SwRI leads the field of magnetospheric physics through its involvement and development of magnetospheric missions, as well as through analysis of observations from missions such as Magnetospheric Multiscale (MMS), Polar, IMAGE, Cluster, TWINS, and the Van Allen Probes. In addition to the study of Earth’s magnetosphere, SwRI also investigates the magnetospheres of other planets, such as Mercury, Jupiter, and Saturn. 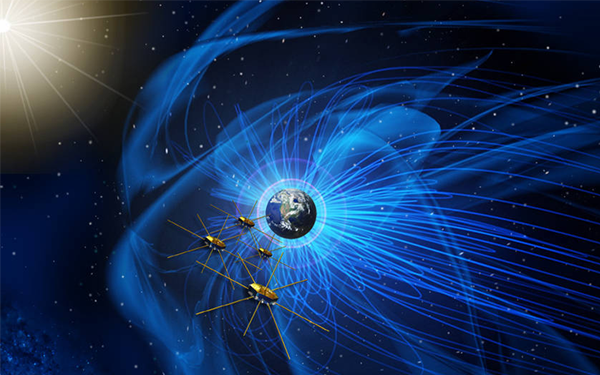